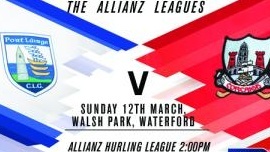 Kieran Kingston has announced his starting fifteen for Sunday's trip to Walsh Park to face Waterford in round 4 of the National Hurling League.

The team is unchanged, meaning injury doubt Daniel Kearney has been passed fit to start after coming off the field with a wrist injury in last Sunday's loss to Kilkenny.

The Cork panel has been named as follows;

Tune in to The Big Red Bench on Saturday from 6pm as we preview this game with Cork Manager Kieran Kingston, while we'll be providing updates from Walsh Park on Sunday from 2pm, with reaction and analysis following the game on The Bench at 6pm.