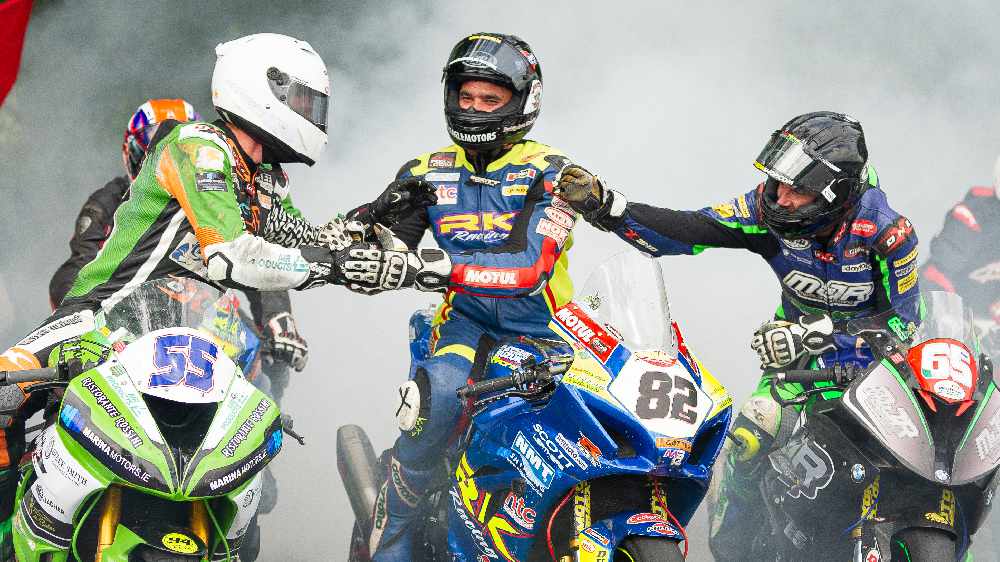 In what may have been the most talked about road racing meeting of late, the Munster 100 made a dramatic, exhausting and enthralling return to the road racing calendar over the August Bank Holiday weekend.

The main talking points had to have been Derek Sheils continued dominance in the big bike class as he made it 9 National Superbike races on the bounce as well as securing victory in the Carole Nash Grand Final. The other story of the day had to be Skerries man Micko Sweeney who claimed his first Irish National Championship by dominating the Supertwins class.

On Saturday morning the sun shone favourably on the Glanmire track but once the first Open practice session got underway the rain came to dampen the optimistic spirits of the large Cork contingent. As the weather deteriorated the decision was made to declare the practice sessions as non-timed so riders could make best with familiarising themselves with the track. The sessions progressed promptly under the supervision of travelling marshals Messrs Desmond, O'Connor and Farrissey.

On Sunday morning as the cloud began to clear to reveal blue skies the race's proposed schedule took a different shape at Riders briefing as Clerk of the Course Sean Bissett shuffled the order in light of forecasted inclement weather. At 10:10 the Munster 100 Open Championship race got underway and the man of the moment Derek Sheils shone through to clinch victory from Sweeney by 4 seconds and Mullingar man Thomas Maxwell rounded out the podium positions. The victory meant Sheils has now secured both Ulster and Irish Superbike Championships in the space of 8 days as the Burrows Engineering outfit look ahead to Dundrod and the Ulster GP.

Next to take to track was the Senior Support race and Dermot Cleary picked up where he left off on Saturday's non-championship running by taking victory from Class leader Tommy Henry by 3 one hundredths of a second. Kinsale rider John O'Donovan took a comfortable 3rd position 16 seconds adrift.

Just before the running of the combined 250-350cc classic race control called for the Carole Nash Grand Final grid to take shape in the paddock as the threat of rain loomed. The usually very well populated classic grid was down somewhat as a result of a clash with Bishopscourt but none the less the protagonists were to the fore and with very little to separate them. Brian Mateer took victory on board his Suzuki T20 from Richard Ford with Philip Shaw finishing 3rd. In the 350 class Ed Manly and Barry Davidson renewed their rivalry with the Meath man winning by just over 2 second and Ian Thompson 3rd.

The Superbikes returned to the grid for the feature race of the day but as the forecasted rain began to fall after flag fall it was clear that a red flag was imminent and the riders made it known passing the start/finish line. With no sign of the weather improving the superbike riders returned to the paddock and made way for the combined 205-400cc Junior and 125-450cc races which got underway at 11:55am. The small grid inevitably strung out but that didn't take form Skerries' David Howard securing victory from Brian Loughlin and RJ Woolsey. Unfortunately Sean Leonard was the only competitor on the day in the 125-450cc race and steered his 125 Mago Honda home through the changing track conditions as the sun began to shine through again and the rain subsided.

Race Control and the organising committee kept the bikes coming quick and fast and the 600cc machinery in Supersport lined up with Micko Sweeney hoping to take a victory from the Cork pairing of Ray and Stephen Casey. Sweeney powered to the front on the R6 Yamaha from the off and maintained a lead that was never in doubt over the 6 laps and the local man from Bishopstown took a well earned 2nd position ahead of Paul Fallon.

Race 6 was under orders before lunchtime and the Junior Support riders served up another close encounter similar to the previous offering on Saturday night. The racing barber Vinny Brennan went in as the favourite and didn't disappoint as the eye catching Kawasaki took the top step from John Ella and a maiden podium for Glanworth man Anthony Lillis in 3rd spot. The victory also sealed the Junior Support Championship for Brennan on the TRB 650 twin.

We then had the prospect of favourable weather so the Carole Grand Final entrants returned to the start/finish line. It was to be another duel between the 2 marquee riders but this time it was Sweeney who took an early lead from Sheils on the Martin Jones Racing BMW 1000RR. The power and the determination of Sheils on the GSXR rose to the top again on the second lap as Sweeney clung on to the coattails of Sheils in the hope that he could seize on any opportunity should it arise but it never came as the Wicklow native clinched an impressive Superbike double. The final step on the podium was a close run affair between the Rebel trio of Ray Casey, Club President Derek Wilson and Stephen Casey. Ray Casey onboard the ZX6R managed to take the 3rd place honours with Wilson 4th, Casey 5th and Thomas Maxwell finishing the top 6 with Kinsale's Stephen Tobin coming home 8th on the R6 Yamaha.

The penultimate race of the day brought the biggest smile from Micko Sweeney as he powered his way to a dominant victory and Championship winning Supertwins title. On a borrowed bike thanks to Noel Smith Sweeney's credentials were never challenged while Darryl Tweed and Vinny Brennan pushed hard to secure the podium places.

The curtain came down on the day's proceedings with the combined 500-1000cc classic showpiece and it was Richard Ford and Barry Davidson in their respective classes whom savoured victory. Ian Thompson and Philip Shaw came in behind Ford and  the last podium, but by no means least, of the day was filled by Andy Kildea and Billy Lyle in 500cc.

Bishopstown's Stephen Casey also picked up the perpetual Joey O'Driscoll Cup as the Best Cork rider, Micko Sweeney received the honour of Carole Nash Man of the Meeting and Derek Sheils picked up the accolade for fastest rider of the day sponsored by An Ri Dubh Road Racing Supporters Club.

All in all the Munster 100 Race Committee and Cork Motorcycle Racing and Vintage Club held firm in the face of adversity and difficult weather conditions that through everything at them over the 2 days. Racing was concluded by 2:25pm and as the team set celebrated the podium presentations with the victorious riders the heavens truly opened once again but spirits remain high after this courageous return of the Keohane Citymix Munster 100 Road Races.