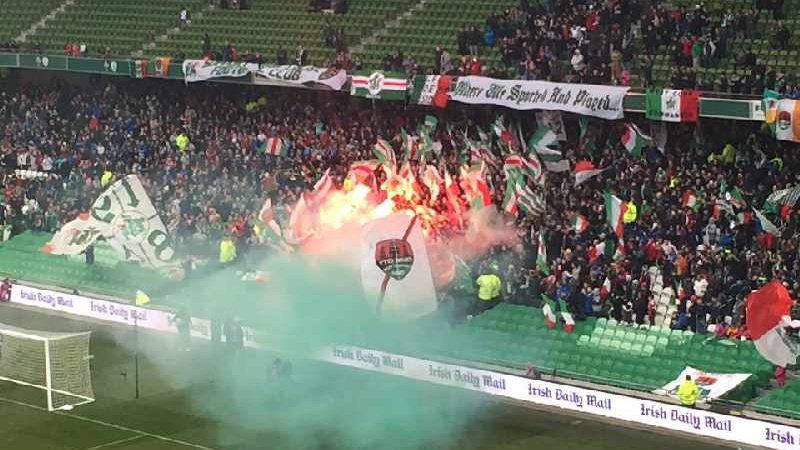 It was in the dying stages of extra time at the Aviva Stadium. The 2016 FAI Cup Final had been a bit of a damp squib, and everyone in the ground was resigned to the game going to penalties.

Everyone, that is, bar Seani Maguire.

The former Dundalk player had been a revelation for Cork City in that 2016 season. Arriving at Turner’s Cross to little fanfare, the former West Ham striker went about rebuilding his career on Leeside, after a frustrating spell at Oriel Park that saw him resigned to the bench more often than not. The Kilkenny native wasn’t even part of Stephen Kenny’s matchday squad for the 2015 final against City.

Maguire combined a keen eye for goal with an incredible work rate, and when he eventually left for Preston North End in the summer of 2017, he left as a club legend with City fans holding him in the same regard as a John Caulfield or a Dave Barry or a Patsy Freyne. Some City fans even argued that he was the club’s greatest ever striker - no mean feat given he spent just a season and a half at the club.

The 2016 Cup Final won’t go down as a classic by any stretch of the imagination, but the final minute of it is burned into the brain of every Cork City fan for eternity. I was on commentary duties for the game on Cork’s RedFM, and I vividly remember my description of the goal:

“In the last minute of extra time. Beattie looking to take the throw in. Looking to take it long. Ogbene looking to get free. Wants to play it long to Mark O’Sullivan and he does… Mark can’t get the flick on, it falls to Sean Maguire who takes a shot… GOAL FOR CORK CITYYYYYYYY!!!!!!”

The ball seemed to go into the net in slow motion. Maguire’s shot took a wicked deflection off Brian Gartland, completely wrong footing Gary Rodgers who could do nothing but watch it trickle past him and nestle in the bottom left corner.

The City fans behind the goal erupted, the entire Cork City bench emptied and ran to Maguire, who had just etched his name into the club’s folklore and joined Derek Coughlan and Denis Behan as an FAI Cup final match winner for the Rebel Army.

Afterwards Maguire was his usual modest self.

“This team, this manager, these fans, they deserve this. If you asked me beforehand what way you’d want to win it you’d say last minute winner!

“I just put the ball in the back of the net. Look at the boys there and the work they put in throughout the game. Amazing. Top performances all season. And we deserved that.

“As for the goal - my legs were gone at that stage! Marky came on and I dropped into the hole. It wasn’t my best game. I kept on giving it away.

“Beats put in a long throw into the box, Marky made himself useful like he always does. I saw a half chance to take a volley and it took a deflection and it trickled into the bottom corner.

“Before it hit the net I had the jersey off and all! I was away celebrating. I didn’t even realise the bench had come over to celebrate because I was at the bottom of the pile getting squashed. To do it in the City end, in front of my family, my friends - they deserve it. It means a lot to me and it means a lot to them.”

Maguire’s 20 league goals the following season helped City to their first league title in 12 years - he finished the league’s top scorer despite his departure midway through the season. That City have struggled to replace him should come as no surprise - strikers like Maguire in the League of Ireland are few and far between.

On his trips back to the Cross Maguire is mobbed by fans wanting to get a photo with or shake the hand of the man who won the Cup for City. The man who helped win the league for City. “My face is killing me from smiling for photos!” he joked after North End’s recent friendly win over City at Turner’s Cross. Everyone in the ground seemingly got a selfie with him. And he was only too happy to oblige.

He may be from Kilkenny, but he’s one of our own. He’ll always be Cork City’s Seani Maguire. And no City fan will ever forget Maguire wheeling off to celebrate winning the FAI Cup for the Rebel Army before the ball even hit the net.

This article originally appeared in Cabinteely's match day programme for their FAI Cup tie with Cork City. It was written by RedFM's sports editor Ruairi O'Hagan.

The Coronas - La At Night