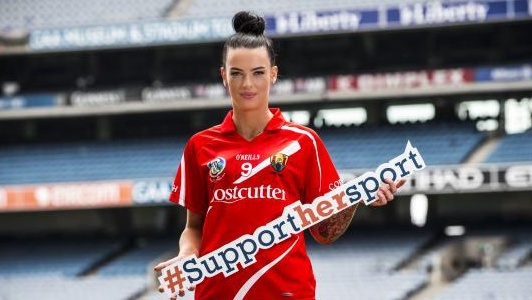 Cork look to retain the O'Duffy Cup this Sunday at Croke Park, and equal Dublins' record of 25 All Ireland titles on the roll of honour.

Standing in their way however, are a Galway side that have beaten them twice so far this year.

Cork Captain Ashling Thompson (pictured, via @officialcamogie on Twitter) has spoken to us about the importance of recovering from minor mistakes on the Croke Park stage, click PLAY below to hear some of her pre match thoughts and tune in to The Big Red Bench on Saturday evening from 6pm for our lengthy preview including more from the Milford Clubwoman as she discusses her emotional style of Captaincy.

We'll also hear from Manager Paudie Murray as he targets an even bigger achievement than last years success, given the change in personnel in his squad.

We've been building up to Sundays match all week, hit the following links for more interviews from the Rebels Camp...

Gemma O'Connor describes balancing her Camogie schedule with Army life, and the prospect of retirement.

Rena Buckley dismisses the relevance of targeting her 15th All Ireland Final Medal, and gives her thoughts on Galway.

Eimear O'Sullivan details her recent return from injury as she targets a place in the starting fifteen.

Julia White explains how a short hiatus at the beginning of the Championship has reinvigorated her game.

For full details of the Triple Header click HERE.