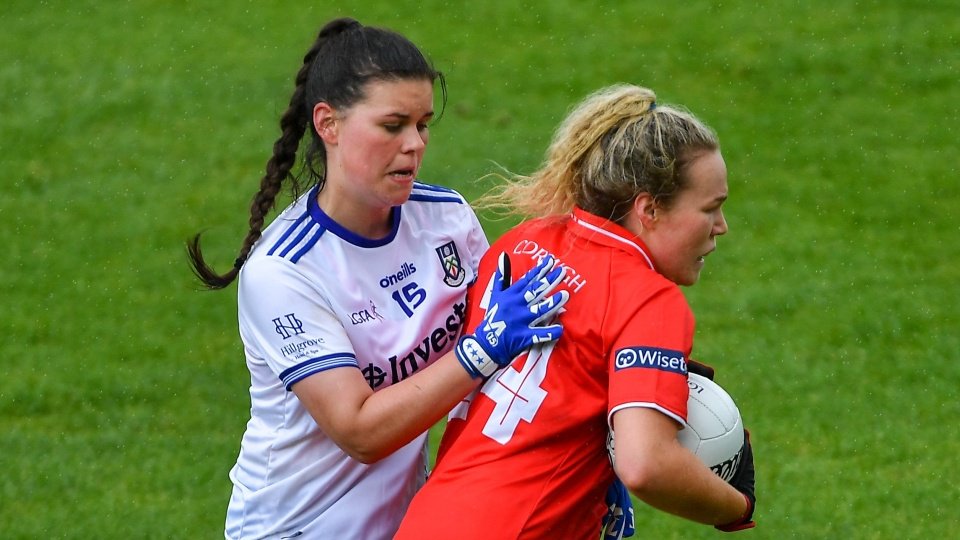 Katie Quirke of Cork in action against Macayla Grennan of Monaghan during the All-Ireland Ladies Football Minor A Championship Final match between Cork and Monaghan. Photo by Piaras Ó Mídheach/Sportsfile

Last year’s beaten finalists were playing in their sixth straight decider and showed their experience as they took a 2-5 to 0-5 lead into half-time.

Cork had avenged their 2018 final defeat in the semi-final against Galway, with Quirke grabbing a deserved goal before the finish and she was again the key player in the final.

Monaghan signalled their intent early and midfielder Aisling McAnespie bounced her shot off Sarah Murphy’s post. But Cork held on and they took a 1-4 to 0-1 lead by the 12th minute.

Jennifer Murphy scored first for Cork in the second minute and that was cancelled out by Hannah Sherlock before the Munster outfit went on the rampage.

Fiona Keating scored a point and Katie Quirke added a free. Then Keating raced through and sent the ball low into the Monaghan net in the tenth minute. When full-back Ellen Baker scored Cork were six points clear and looked to be cruising.

But to their credit Monaghan rallied and they scored the next four points of the half. Sherlock tapped over her second to stop the rot at the end of the first quarter. Áine Loughman and Lauren Garland also found their range, Amy Garland fired over too.

Monaghan only trailed by 1-4 to 0-5 but they were rocked by a 1-1 blitz. Quirke scored a free in the 28th minute and moments later the Cork full-forward drew a few defenders to give Keating the easiest of finishes.

It was a massive blow to Monaghan’s chances and it could have got worse if Duffy didn’t save again from Quirke just before the break.
Ellie Jack had also missed a chance in front of goal. However, Cork still took a big 2-5 to 0-5 lead into the break.

Quirke scored her third free right after half-time but Monaghan hit back and it was a crucial goal. Jayne Drury played a captain’s part as she soloed through the heart of the defence and blasted to net.

Lauren Garland scored a rallying point and Drury had claims for a penalty waved away as Monaghan assumed the ascendency.

Down the other end Quirke missed a goal chance for Cork but Faye Ahern took her opportunity when she finished off the post in the 46th minute.

Michaela Linden answered that with a point but Quirke scored three late points to ease any worries of a potential fightback as they claimed the Aisling McGing Cup.