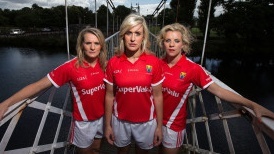 The 11 time All Ireland winner has signed for AFLW side Greater Western Sydney Giants as an international rookie.

Stack announced her retirement from intercounty action in January of last year, and will move to Australia with her family in November.

The 2016 Ladies Footballer of the year becomes the third irish player on the Giants panel, along with Mayo's Cora Staunton and Donegal's Yvonne Bonner.

"After three years of interest on our part, it’s really exciting to have Bríd Stack finally make the decision to come to Australia and be part of our list.

“Bríd is a key defender with great speed, good agility, is very competitive and has a long history of having high-level success in women’s football in Ireland.

“This is a recruiting model that we’ve followed with our two other Irish girls and have had great success with Cora and Yvonne in recent years and we hope to get the same outcome with Bríd.

“What an amazing thing for our footy club, that a young woman is willing to not just move herself here to play Aussie Rules but to bring her 12-month old son and her husband, as well, in the current COVID-19 environment.

“It’s just an amazingly courageous thing to do. We’re grateful and hopefully we can make the best of the opportunity for all involved.”